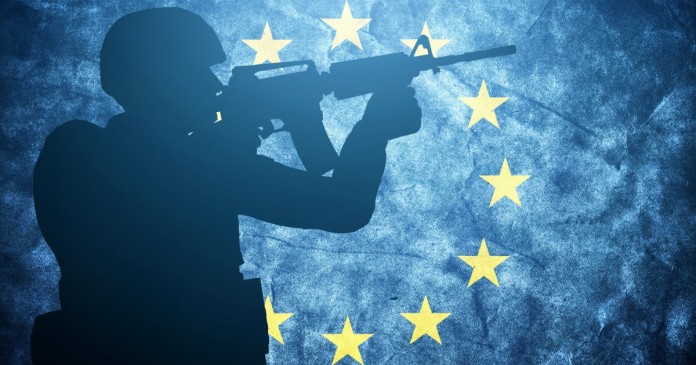 There has been much debate about the EU army, most of it whether it is needed or not. This is all irrelevant as the EU project is working towards a centralised state with a single currency, tax policy and Geo political strategy. That is the ultimate aim , therefore unless the project collapses en route this is what the EU will have. Joseph Stalin was attributed with the question ‘ How many divisions has the Pope ?’ It is as relevant today as it ever was albeit in a different context. Any state , large or small aspires to an army and airforce, navy if a maritime power. The commission want it, the parliament would broadly welcome it, national governments are also in favour, only political and constitutional policies delay its instigation. The strongest  military power is the UK if only now by a narrow margin and the UK Foreign Office and Ministry of Defence are in favour reflected in the recent buy European procurement policy. Interestingly the modern army officer is mildly in favour as defence cuts bite ever deeper, it might possibly save careers if the EU could give new impetus to the profession. This blog has already flagged up the growing anachronisms in NATO, it cannot be long before the western industrial democracies re think defence. Officers of one star rank already have an EU remit, there is a cadre in place for the project to mature notwithstanding the hurdles, of which there are many. The EU experience has shown that the project marches relentlessly on and constitutional protection at sovereign state level are powerless ( the eurozone is the greatest example of this). Let us therefore leave the nuts and bolts of procedures towards the army to another briefing, but look at how the EU Army might be constructed.

In designing an army with intergrated command and control systems some authority needs to chart the military dogma. With NATO this was relatively straight forward, the Soviet Union was the perceived threat to Western Europe, there were the bad guys the other side of the wire, the Berlin Wall , watch towers, spies, big military build ups on both sides. This embedded pressure led to an integrated training, command and ammunition structure . It was not  perhaps necessarily quite as simplistic as it appeared , see another IDDE brief on Russia. The EU it would seem looks East in much the same way as pre war Germany , the project runs up to the Russian borders . So the EU want an army more as a political accoutrement, a coming of age, trophy wife, pick your own analogy . The trouble is, not unlike the U.S. Military industrial complex, or the Kaiser’s war of yesteryear if you build ships aeroplanes and put men into uniform there will always be politicians safely out of harm’s way who will find an excuse to use them.

I outline therefore a command structure here as something of an academic excercise. France, Germany and Great Britain are the only serious players in matters military and I mean that in no disrespectful way. Finland and Holland are quite capable of punching above their weight, and certain aspects of Italian aeronautics are cutting edge. For an EU army to carry any weight internationally it must be capable of fielding at least two army groups. This is assuming it is not to be a modest defence force the point of which would be difficult to comprehend as a re invented modernised NATO would fulfil this role.

For those without a military background I gallop through the generally accepted military units that constitute an army.

At strategic European level the smallest unit is a division, a divisional commander  ( a Major General) would expect to have under his command three brigades possibly two of infantry and one armoured. This ratio can be manipulated dependant on the role the division is earmarked for, mountains , plains and enemy strength. Three divisions constitute a corps, three corps an army. This configuration is generally accepted, numbers might vary but not much. Great Britain, France and Germany could field a corps with a modicum of commitment and organisation and have done so for NATO. Fighting ability is impaired by years of peace or expeditionary roles . Outside military elite forces with the exception of the UK I would not categorise most nations as fit for role yet. That is within the NATO role.

From where would the EU army draw these military assets ? Top down I would suggest a Scandanavian/ Baltic army group, utilising their existing warfare capabilities. Norway is not a member of the EU and some form of negotiation not dissimilar to the existing arrangement could be found. Germany and Poland could field a formidable army group with the right procurement, training and motivation, leaving the Mediterranean as the natural sphere of influence for the Latin countries.

Armies need air power and naval support. This is a natural role for Great Britain . Indeed in 1914 naval power was the bedrock of the Alliance before the Great War abandoned to meet the manpower crisis in a war of attrition , hopefully inconceivable today.

This gives the EU the armed forces they feel they require. What will happen if this goes ahead without an independent professional approach will be a piecemeal incoherent shambles to rank with energy, fishing and agricultural policy.