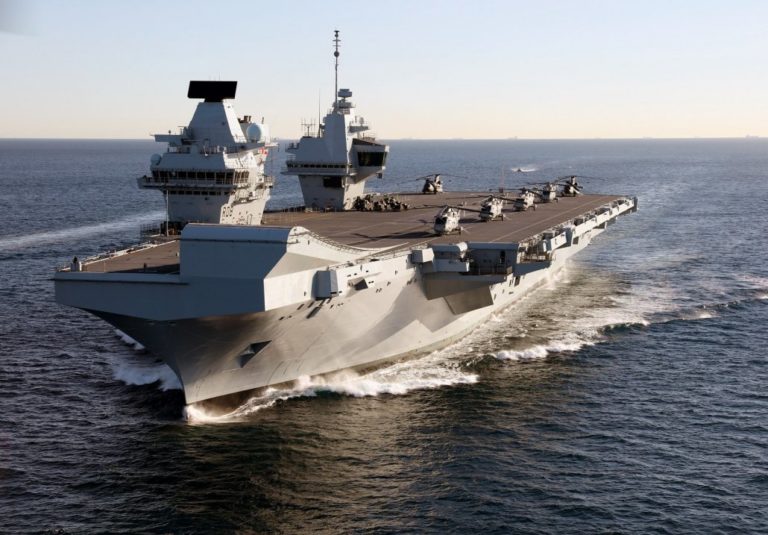 The demise of the serious defence correspondents in MSM have left the nation exposed to geo political military mistakes of epic proportions. Jonathan Beale at the BBC  & Lucy Fisher at The Times are splendid Gilbertian figures of pomp & ineptitude. The former no doubt would be more comfortable at The Goole Advertiser, the latter on shoes & handbags at Hello Magazine. One wonders what the criteria of their selection was. Or perhaps ignorance of the subject of national defence is part of a conspiracy to destroy it.

Nothing exposes the incompetence more than the horrific sacrifice of the UK defence budget to political delusions of naval global faux grandeur. The late John Keegan & Clare Hollingworth would have nipped the idea of two aircraft carrier groups in the bud. I was given the wonderful definitions of Strategy & Tactics at RMA Sandhurst attributed to General Patton. A bit dated but you will get the drift, quote ‘Strategy is how you persuade girls to come to the cinema with you & sit in the back row, tactics is what you do when you get her there’.

Let us go to first principles, something nobody seems to have done before these two horrendously expensive lemons were commissioned. The first question always for national defence is ‘What is the threat?’ relatively easy when the Warsaw Pact countries were both militarily & ideologically lined up against the west. The military,  industrial, Congressional complex cannot accept the Soviet Union has gone, along with the threat. The $ Trillion pa budget has its foot on the throat of the American taxpayer, the US State Dept. has imperial ambition of Napoleonic magnitude, the CIA keep the antagonism permanently on the boil with fake information perpetuated by an unquestioning western MSM & the US geopolitical strategy in the middle east is masterminded by Israel via their powerful lobby in DC.

NATO is now expansionist & has a forward policy right up to the Russian Federation’s border. This means abandonment of any pretence at a defensive posture envisaged by the founders of NATO. The EU is a military man of straw which leaves America as the global protagonist. Nine hundred overseas bases & 200,000 overseas personnel. On borrowed money! Suicidal politics of which Eisenhower warned fifty years ago. Russia has been driven to military co operation with China, their natural strategic enemy, American policy has added confrontation in the South China Sea & weaponization of the dollar.

Where does that leave the UK? Britain is a regional power, no longer a world power. Where then & from whom is the threat? Not Russia, they have no interest in conflict, nothing whatsoever to gain. Nor are their defences now anything but just that. A land force to be reckoned with but not a naval threat. China likewise, unpleasant regimes admittedly but not militarily hostile beyond historic border skirmishes. India can take care of itself as can South Korea & Japan.

A carrier force is about the projection of power, the US has eleven. But they are an imperialist power reminiscent of the British Empire over one hundred years ago. The British do not need nor can afford imperial projections of power. The invasion threat is from illegal immigrants from the continent. Perhaps fishery protection is another priority. We need inshore protection, more marines & constantly upgraded & efficient submarines. Goodwill visits are important, frigates & destroyers can do this as can a state of the art Royal Yacht.

The excuses are already coming, the carrier forces are not fit for purpose, nor will they be in the foreseeable future. If they are to be deployed they will need support ships from other countries, so they lose any hope of independent action. This renders them valueless. Imagine relying on the French or Italians to sail with the UK for a mission solely in Britain’s interest. Think Falklands. A war which could have been avoided with two conventional submarines on station. Carriers are too valuable to be aggressively deployed in any event. Remember the old adage, there are submarines & there are targets.

Britain needs strong defences, an effective air force, territorial army & navy equipped for the threats of today, which are much closer than Russia or China.

The two carriers will be mothballed by 2025 when the obvious truth is recognised.