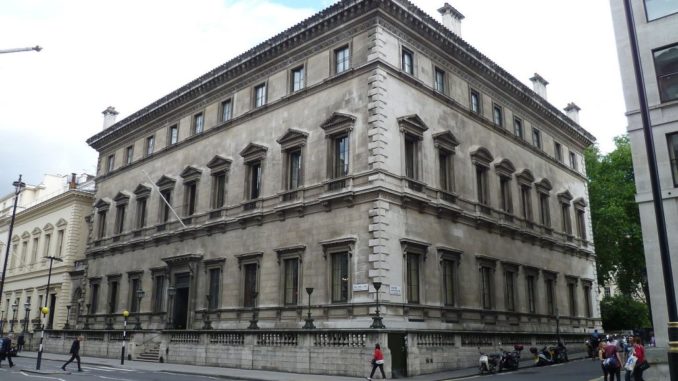 I am & have been a London clubman most of my life. I have been accused of being a Wodehousian character over the years, I am happy with that, his characters, even the villains are never all bad save perhaps the Efficient Baxter with the gleaming spectacles,  terror of the Earl of Emsworth at Blandings Castle. But I digress. What is a gentlemen’s club what is it for? Wodehouse invented the Junior Conservative Club, The Drones & Ganymede, caricatures  certainly but not wildly off the mark. How did gentlemen’s clubs originate? Let me set the scene.

In the eighteenth & nineteenth century many London clubs were formed & for a variety of  reasons. Some were formalised throw backs to gaming or coffee houses, some military or naval, the idea being good fellowship among gentlemen from the same professions or social backgrounds, many from out of town or overseas, many to this day based on political, commercial, clerical & professional affiliations.  A home from home if you will but with tribal undertones the concept of gentlemanly behaviour was paramount. Misbehaviour was frowned upon & resignation was expected from cads, scoundrels, rakes, embezzlers & cheats. The social rules have long since relaxed, but proper chaps are still expected to do the decent thing if the boundaries are crossed too often or too publicly. Although the ‘posher’ the club the more forgiving it usually is or no ministers of the crown would ever remain at their clubs, lying & cheating being a prerequisite for a successful political career.

In the 1970s gentlemen’s clubs went through a torrid time financially.   Many had to sell their freeholds just to survive . My own club is an amalgamation of The East India Club, The Devonshire, The Eccentrics & The Public Schools Club. Like most of the top clubs it lurks with no outward sign in SW1.

As one might expect over the centuries clubs evolve reflecting  membership values & indeed subliminally the attitudes of club servants, more influential than is often imagined. Most club servants could double their income by moving to one of the big London hotels but the ethos of the club & loyalty to members runs very deep & it cuts both ways.

Why do I Write of Clubs Today?

Gentlemen’s clubs are facing another assault not dissimilar to that of the 70s which killed a number of them. The hysterical government response to the Coronavirus has murdered the hospitality & aviation industries, both of which survived the 1957/58 & 1968 flu epidemics which were more deadly. Moreover as always governments hate what they can’t directly control. For hundreds of years the State has resisted freedom of association. Whether it be clubs or pubs, incidentally pubs & working men’s clubs have born the brunt, State hostility is rampant. Tax on beer, VAT, smoking regulations  & now property tax are designed to persuade the average man to remain at home & watch highly controlled television drinking cheaper beer provided by supermarkets committed to political party donations & honours for the senior  executives. London clubs are non profit making historically, by design in their articles of association but recently been made subject to millions of pounds in property taxes for which they get little or no public services.

Like many British institutions,  those with the levers of power feel the overwhelming desire to ‘modernise’. The gentlemen’s club is no exception. Sometimes of course the need to modernise is obvious. More often less so. The Army & Navy Club vandalised its Victorian lavatories, complicated modern showers replaced bathtubs in my own club but admittedly air conditioning is a boon to bedrooms in summer.

Recently the old chestnut at my club has re-emerged should we abandon our status as a gentlemen’s club? In short allow ladies to join or presumably one of the newer more fashionable genders, wonders would this benefit anyone ? In the case of my club the argument is made for an increase in membership, recently under pressure from the eccentric machinations of crazed political scientists beavering away in the basement of Number Ten Downing St.  I had no idea any ladies wanted to join a gentlemen’s club, any more than I would wish to join one of the growing number of ladies only clubs. A few might of course, but then I suspect not enough to match the number of members who might consider leaving to rejoin a genuine gentleman’s club.. How would such wokery enhance the treatment of ladies within the club. The continuing liberalisation of my club opened the main lunch room to ladies mid week, there was a perfectly good smaller separate lunch room should  a member wish to entertain a lady, accompanying that decision came the closure of the ladies’ drawing room.  So the whole rearrangement was both pointless & accidentally detrimental to our ladies.

Incidentally my club enjoys a well deserved reputation as being the friendliest in London, serving the best food & interestingly the being the most hospitable to ladies. Girlfriends, wives, mothers & daughters abound, especially at weekends, good news for old timers like myself as our membership has the youngest average age thanks to its Public Schools Club provenance, thus providing eye candy for all the old duffers in the bar.

Is there a Compromise?

Counter-intuitively many of those whom agree with me are younger members & ladies already associated with the club via their menfolk.

Some anecdotes to outline my position.  Here I take the assessment discipline from one of my historical heroes Frederick Bastiat, a top economics philosopher from the nineteenth century. Famous for his wisdom that it is always easy to see an obvious advantage in a new policy, not so easy to assess the unseen implications. It is the unseen at issue here.

I commanded a Territorial Army transport squadron back in the 1980s. Most of the truck drivers were local coal miners. Tough men of very strong family values, wives supportive in the traditional way of Yorkshire working class women. The happiest command of my somewhat undistinguished military career. We were marginally under recruited, a permanent  feature of peacetime military life. A Whitehall warrior genius came up with the idea we should recruit women to drive the trucks. In WWII women could & did do almost everything  my mother was a WAAF so I had first hand experience of women’s adaptability in every field of endeavour. I sponsored Cambridge University Ladies’ rugby for many years, many were welcome club guests. So in theory the Whitehall Warrior was right. But he was not a student of Bastiat, he was not cognisant with the concept of the ‘unseen’. Whilst the wives were happy to wave goodbye to their Doncaster menfolk as they drove their wagons out of the barrack gates to link up with 4th Armd. Div in Germany  they now saw women leaning out of the cabs waving adieu. This wasn’t in the man/wife Territorial Army deal. Net recruitment went down, men left. You see of course women could drive trucks as well as men but it wasn’t as simple as that.

If you imagine that is an old fashioned parochial north of England phenomenon think again. The last time female membership was mooted in one of my London clubs my wife, a professional woman made a similar point understood by her Doncaster sisters. I quote

‘I know when you are in the club you are safe in every sense of the word. You will be drinking too much beer discussing rugby or cricket games of yesteryear & tumbling off to bed because they very sensibly close the bar at 11.00pm,  alcohol, women & men away from home are a dangerous mix’.

At one of my old clubs The Army Navy, they have a great system, widows of deceased members may join as associate members. A comforting thought for all. Eminently practical.

There is no room or bar at my club a lady cannot enter, I would restore her private drawing room in exchange just for a return to mid week lunch arrangements for gentlemen only. If anyone at the Guardian or Observer newspapers think my views are anachronistic or misogynistic I really don’t care. Or if some trendy public school headmaster or corporate thruster doesn’t like gentlemen’s clubs there are good London boutique hotels aplenty.

In the words of a young fellow member & friend, let us keep our attitude to our ladies both of members & staff traditional & indeed chivalric. What a wonderfully apposite word, only a gentlemen’s club member would use it.