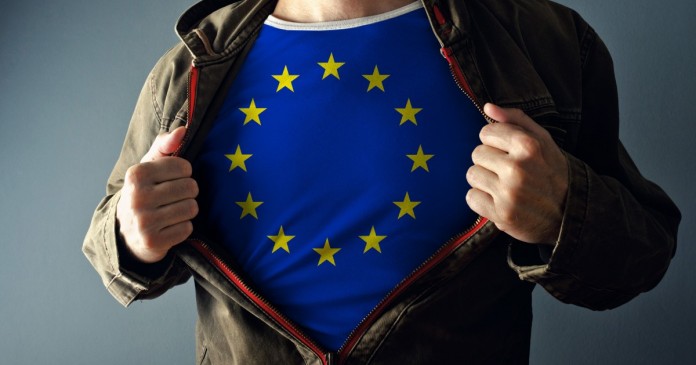 It might be fruitful to examine the phenomenon of European citizenship given the commission’s posturing on the thorny subject of an EU army. Leaving a purely mercenary aspect aside, Goorkas, Swiss Guard and privately raised fighting forces, most armies are citizen-manned albeit in some cases professional. Historically the men fighting are loyal to a cause or ideal. Their motivation is usually idealistic, this does not, of course, mean it cannot be misguided.

A soldier’s loyalty in combat is first and foremost to his immediate chums, his section. Secondly to his platoon and platoon officer and then his regiment, in the British army the regimental bond is extremely strong, often built over generations, father and son serving the regiment geographical recruitment binds soldiers together to an extent incomprehensible to most civilians. This is true of other nations perhaps Napoleon’s Imperial Guard being the best known. Officers owe their allegiance to their nation often by sworn oath to the sovereign or head of state. This is particularly true of the British Army where officers hold the Queen’s Commission and is taken very seriously as politicians have sometimes found to their cost, the Curragh incident of 1913/4 a particular example. A soldier’s allegiance and loyalty, therefore, is extremely complex and vital when the discomfort, fear, deprivation and injury are the daily test of combat. Morale is everything. These psychological pillars of soldiering are not understood by most politicians and bureaucrats, how could they be, it has to be experienced. What it does mean is an army cannot just be thrown together by a committee with some academic theoretical posturing. Let us examine the somewhat ephemeral concept of European citizenship, the holy grail, for the ideologue of whom most people aren’t.

In England Londoners have almost nothing in common with Yorkshiremen. This interesting relationship of love/hate is almost 1000 years old. Lancashire folk don’t like Yorkshire folk, that goes back to the Wars of the Roses. In the army these counties and towns raise their own regiments and loyalties are fierce. In war these regiments with different traditions bond together as a fighting force because there is a common foe and the bottom line is everyone is English, we are of the same kidney, roused even today but Shakespeare’s Agincourt speech Henry V ‘s

‘ once more into the breach’. Great Britain has now for over three hundred years fought alongside Scottish, Welsh and Irish troops, again with a common bond and language. A fighting record perhaps unsurpassed by citizen armies in history.

But we understand what a Briton, Frenchman, German, Spaniard or Dutchman is. Forged by history over many generations sealed in blood. These prejudices cannot be wished away, they are based on national experience. The British are an island race, undefeated in 1000 years never occupied by a foreign power although ravaged by three bloody civil wars. There is no deep seated fear or hatred for any European countries. Notwithstanding isolated acts of Teutonic barbarity in the Great War there is no emotional baggage. This is simply not true of mainland Europe. How could it be? Two wars in recent history of appalling destruction, the fear

and mistrust in certain parts or Europe is palpable.

Moreover, the cultural differences are unbridgeable, already the economic and civic rifts between Northern Europe and the Mediterranean basin are threatening to bring the whole EU project crashing down. Indeed, although the EU project salesmen talk glibly of the union in diversity, this is simply the sales pitch of the purveyor of snake oil down the ages. Although international political elites have much in common, educational, salary, pension and security these do not, nor could they extend to the electorates. This is one of the reasons that the democratic political process has been sidelined in favour of ‘the Community Method’, fostered by broadcasting and corporate elites whose snouts occupy the same trough.

There is a great mutual appreciation of different cultures and a tolerance of religion Islam might do well to emulate. This is cemented by the enormous mutual love of art and music, which thankfully knows no borders. Food and sunshine dominate all our leisure hours regardless of nationality and thank the Lord for that.

But none of this is enough to build more than an area of free trade and mutual cooperation. Nor do most ordinary folk wish it to be. In the last 70 years, Europe has seen the diminution of old enmities caused by historical conflict, the last 5 has seen the old fissures reopen, actually caused by the project, Britain/France on immigration, Germany/Greece on debt repayment. The idea of a plausible army is absurd, led by whom? Paid for by whom? Who is the foreman?

The great French economic philosopher Frederick Bastiat promoted the truism that when trade crosses borders, armies do not, so more trade please and fewer armies.