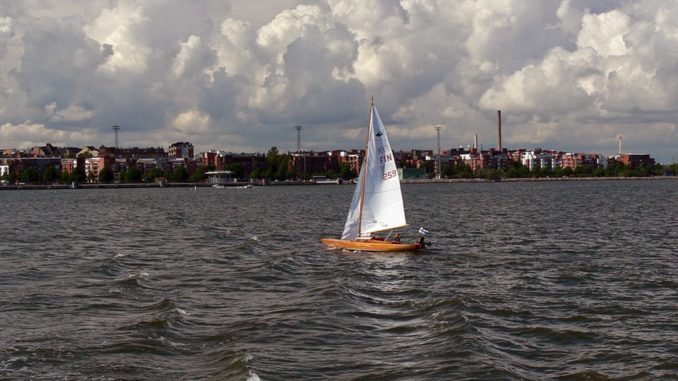 Believe me my young friend there is nothing,  absolutely nothing, half as much worth doing as simply messing about in boats (Ratty to Mole, Kenneth Grahame’s The Wind in the Willows)

I first started messing about in boats when I sailed before the mast on the Norfolk Broads in the early sixties under the infamous ‘flogging captain’ Alan Bloom (my father). I learned my trade & the ways of the water so rose to rapidly to the quarter deck & took ship under the same captain as sailing master on the treacherous shark infested waters of the Oxford Union canal.

My cadetship complete I assumed my first command with a scratch crew on the mid Thames waters in the seventies followed by a spell as super cargo four years later off the Cape of Good Hope so,  together with my encyclopaedic knowledge of C.S. Forester novels I fancy I know my stuff.

Last year I trained a crack crew & succeeded in sailing from Ely to Cambridge in under three days. The confidence gained in this note worthy achievement prompted the concept of a 2022 river expedition to find the source of the Niger.

My doctor would not pass me fit to sail without an experimental Pfizer jab for dengue fever which he confirmed has so far killed marginally fewer travellers than the fever itself. I made an on the hoof risk assessment & switched the proposed expedition to the Zambesi, my doctor insisted on the latest experimental Wellcome Foundation spike neutron treatment which infects you with a synthetic malaria symptom designed to ward off the genuine malaria prevalent on the Upper Zambesi. Apparently this treatment is over 5% successful in tribes of that region although 100% fatal in Englishmen over twenty one who die before they reach Africa. His receptionist tells me Big pHarma pay for his entire year’s golf.

I broke in to a run down the corridor as he wailed after me that Astra Zeneca had developed an experimental drug to combat monkey pox which could be delivered rectally, after two weeks of trials involving nearly fifty people of whom only eight had died & six permanently paralysed.  Vital if we were going to the upper Thames where the residents of Whitchurch & Pangbourne have an alternative life style apparantly which could possibly infect you if you succumb to the prep school temptations of yesteryear.

“I offer this in no judgmental way” were the last fading words I heard from this sad physician who saw his 2022 golfing junkets slipping ever further down the lavatory of life hard on the heels of his hippocratic oath.

The expedition decided upon. The river craft is selected, a six berth cabin cruiser with a Perkins Marine diesel engine & a crew ratio of 2:1 on berthing. The very one I wanted on the Niger minus mosquito nets.

So what do we need in a crew ?

He must be firm but fair with experience on the quarterdeck natural leaders fare best as ever. There are competent female skippers but as Damon Runyon once remarked ‘the race isn’t always to the swift, but that’s the way to bet.’

Don’t opt for a celebrity style chef. After a long day on the water you don’t need roast vole’s liver pink on the bone in a raspberry jus & stuffed aubergines with a truffle garnish. Toad in the Hole is the kind of tough guy grub you need; so why then do you need a chef ?  Because they  have to cook everyday in a space the size of a telephone box with a faulty oven, sometimes in temperatures of 90° Fahrenheit with dodgy pots & pans in a running sea & force 9 gale

By the by, real chefs don’t wash up. Take a squaw for that. If you are young eye candy is good but they can get bolshy, wives are the best third member of a three man crew. They wash up & decks can’t swab themselves.

The lower deck make weights must be canine. Jerome K Jerome’s three men in a boat had a fox terrier, Montmorency, well, that’s  all right in a skiff but a cabin cruiser needs two terriers. Jack Russell bitches are ideal.

What is their purpose?

To trip up crew trying to moor the boat, pick fights with swans being fed by the chef secretly on the stern with bacon rightly the preserve of the skipper’s second helpings & annoy path walkers with spaniels. They also clean the galley floor every night of droppings from the chef’s tired & emotional hands. You simply won’t find a sober chef prepared to make the voyage, try & keep the rum ration until after dinner.

Let me then make some observations, practical & anthropological. You might find the latter somewhat subjective.

Chartering a cabin cruiser on most English rivers is easy if expensive. The Thames is no exception, mid Thames is busy with rowers & boats (circa Maidenhead), the upper Thames (Reading onwards) is for the personal benefit of the rich & fishermen. Paddle boarders replace wasps in June for meaningless futile annoyance but not as irritating as the lycra clad two wheeled road blockers.

We estimated over two hundred fifty NO MOORING signs in between Caversham & Oxford. It is almost impossible  to moor in high season difficult in June. The upside is the river is empty.

The scenery where the Berkshire Downs meet the Chilterns is delightful, if you can get ashore unspoiled Dorchester is lovely & the people friendly, a rarity in that part of the world sadly, beware you northerners it ain’t like home. We found a pub garden in Whitchurch where the beer was £5 a pint (with no head) & four chaps on the table behind us sporting nail varnish, no doubt riddled with monkey pox. We visited the church at Mapledurham & asked the verger a simple question on parish history & were told to ‘look it up on Wickipedia’, a Yorkshire verger would have kept us there all day!

I now know where Catherine Tate gets her ghastly middle-class wokie characters.

Canals & rivers of course have locks. Most locks now are electronic, but lock keepers lurk with quiet malevolence from nine to five with an hour for lunch. Young fellows are pretty amenable but the older ones take their role model from ARP warden Hodges from Dad’s Army. My advice is sneak through when they are not there.

The river has accommodated an extraordinary eclectic mix of characters past & present.  The incomparable Micheal Cain, the enigmatic Agatha Christie whose work was in part inspired by Riverside villages, at Benson the house of John Masefield perhaps the last poet that can be recited by so many & rock stars of whom I have never heard. But the list is extensive, magnificently chronicled by Christopher Winn in his history ‘I Never Knew That About the River Thames.’ A must for the boring boater.

How do you judge the success of the trip?

Did you strangle your wife ?
Did your wife jump ship at Goring ?
Did the chef bury a meat knife in your throat ?
Did you set fire to the boat?
Are you on a murder charge for deliberately running down the American couple in the canoe?

No to three at least is a good trip.