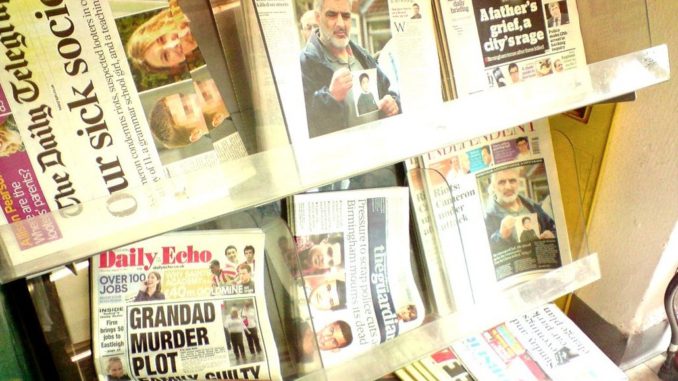 In a parliamentary democracy offering only two political parties the press have played a significant role in questioning government  policy & more importantly holding that policy outcome to account. Not always admittedly for the common good but it fills a major hole where the two main parties broadly share the same political views, New Labour & Modern Conservatives are completely interchangeable. The failure of what we now call Main Stream Media has become evermore obvious in recent decades. When the main parties & editorial MSM policy follow the same path, where the  constitutional monarch is conscientious but weak the electorate find they become politically homeless, especially in a first by the post electoral system.

The relatively recent phenomenon of social media checked the establishment cartel for a decade or so but editorial censorship of even that has stymied any criticism of the now total global political agenda. I draw here your attention to the most important recent failures in no particular order as they are all destabilising the industrial democracies.

One could perhaps put most problems under the umbrella of fake science or even society’s blind determination to avoid truth on an epic scale worthy of Renaissance Catholicism. The global agenda is being driven by a cartel of fabulously  wealthy individuals whose financial control of MSM is as total as it is secret. There are very few international TV stations or social media platforms not in the grip of these individuals. Nor can hitherto independent organisations escape their influence. Bill Gates, Jeff  Bezos Mark Zuckerberg, George Soros & Jack Dorsey between them have enough wealth to pursue their agenda at will, global celebrities of the silver screen or silver spoon assist them with all the gullibility of children seeking approbation of an indulgent aunt.

In order to bludgeon an electorate into submission the global elite need a weapon. The current weapon of choice is climate change. Older readers will remember it as global warming or even the forthcoming ice age. The terminologies change with the latest hypotheses but the weapon is the same. In order to gull the populace into submission the great lie must be that anti democratic legislation is for people’s own benefit that heavy tax is necessary to their very existence albeit reluctantly imposed.  Such nonsense can only be swallowed if there is no voice of dissent, no challenge must be made, where such challengers appear they must be drowned at birth & vilified. With the current status quo this has never been made more simple. Political radicalism is dead, the academic  establishment  close ranks,  it does well out of faux philanthropists & media devotion. It also raises their profile which means more TV which in turn makes very ordinary university lecturers quite wealthy. It confers status on them, very welcome if you were the excused games school swot who couldn’t get a girl friend.

I limit my observations to the United Kingdom here but the basics are true of the United States & European & Union.

Britain has been committed to a net zero policy of carbon dioxide emission, let us examine the total failure of MSM to even address this. The Green Party has but one MP, a massive rejection of green politics unprecedented in Western Europe, yet green policies are pursued regardless of costs or benefits by successive governments. No cost benefit analysis  is available for debate, in parliament or out yet the cost cannot help but reach hundreds of billions of pounds. Nor are the logistics questioned, electric cars are all but a joke constantly  rejected by the market notwithstanding the subsidies attached to them. Nobody wants them so they are forced upon the populace without a squeak from MSM. Like wind power any independent analysis exposes them as not so much inefficient but actually absurd. A gift for the investigative journalist, of which there are almost none. Yet the cost to the exchequer of green nonsense is at least twice that of the great sacred cow the NHS.

But the enormous scam is the complete lack of independent  scientific evidence that man made carbon dioxide will lead to apocalyptic global warming. Yet this hypothesis now patently ridiculous goes completely undebated. It is received wisdom, myth to be more accurate. Yet not only is there no debate, dissent is forbidden. Only Sky Australia allows challenge. The BBC sacked the scientifically qualified  sceptics & replaced them with political activists like Roger Harabin.  David Attenborough virtually canonised by public service broadcasting is allowed most after mistake over nearly a generation but has a strangle hold on world media  & gullible British royalty. The only watertight independent scientific evidence proves atmospheric carbon  dioxide FOLLOWS global warming, it does not precede it. Even the graph in Al Gore’s ludicrous film  An Inconvenient Truth film endorses it if you freeze frame the chart behind his head. If you are a dyed in the wool eco fanatic reading this ask yourself why dissent is forbidden if the debate is so easy for you to win?

Let me turn to Modern Monetary Theory.  Which is of course not modern at all but just a mutated Keyensian theory  long since debunked although not in the political or academic mind.  In a nutshell although debt matters to the individual, the family or the business it is irrelevant to the State because it can print money, this absurdity goes unchallenged every March  when the chancellor  reports to the nation in his speech to parliament. That chancellors of any political persuasion never deliver this statement  on the nation’s finances under International Accountancy Standards goes unremarked. Yet if he were the finance director of UK plc (which he is) he would go to prison for presenting them with 25% of national liabilities  off balance sheet. (Public funded initiatives  & public  sector pension liabilities). A chancellors duty now seems not to the British people but with whichever investment bank has offered the most lucrative post ministerial deal.

How can this be so? Well, the opposition  can’t  raise the issue because they need the status quo to maintain the charade when their time comes around. MSM are broadly committed to high public spending editorially so it remains unchallenged by them, but more perhaps to the point they have no journalistic staff capable  of questioning the fraud of government  spending even if they were politically inclined so to do. You will never hear the national debt discussed in a general election campaign by either political side or public service broadcasting which waxes fat on it. Debt can be inflated away it seems without the electorate noticing it & the public sector of course are as ever protected from it with an index linked package of benefits. Only when inflation hits the High St. Does anyone take any notice, asset price inflation suits the establishment, Wall St. good, Main St. bad.

MSM journalists are paid monstrous  salaries so also remain cocooned from the punishment taken by the working & lower middle classes & old age pensioners. But as they have virtually no serious political representation  who cares?

HSR2, aircraft carriers, overseas aid, state banking, illegal immigration cost £ billions yet go totally disregarded by MSM.  But money saved on these vanity projects could be much better used giving people more of their own money back. Even the most humble citizen knows how to spend their money better than government.

I turn now to the most recent disaster. The so called Coronavirus pandemic. In Britain, as in other countries the appalling economic damage has been caused by the reaction to it rather than the virus itself. Ponder if you will the amazing political buffoonery over the last year.

The government  closed down the country for two weeks to ‘protect the NHS’ a Gilbertian concept if ever there was one. I was under the impression the outrageously expensive monolith of the British sacred cow was there to protect us, not we it. Millions were spent on Nightingale emergency hospitals but never used. The lockdown in some form along with social restrictions, most with no medical or scientific reason were foisted upon the public with no regard for the principles of English Law, the Bill of Rights or even natural justice. Police powers have been extended to a level last known to Europe in 1950s East Germany, resulting in exposure of a level of stupidity worthy of  Norman Wisdom comedy at best or  George Orwell’s 1984 at worst. Yet MSM did not challenge the faux science or those promoting it but lobbied for harsher restrictions whilst being immune from them with guaranteed salaries & a press laisser  passer.

Where was the challenge to the most  outrageous assault on individual freedom in Britain since the sixteen hundreds ? Incidentally I feel obliged to mention here the disgraceful abandonment  of habeas corpus in the case of Julian Assange unlamented by the establishment media.

This recent lack of resolve by MSM have produced some ever increasing eccentricities from an ever more degraded civil service & political scientific establishment.

I list them here for your amusement or despair. Indeed probably amused despair a phenomenon the scamdemic has provided in some measure.

Pubs with no alcohol, Christmas with no family, mass house arrest, the partial closure of the NHS for non covid19 issues, social distance of six feet for an aerosol infection, a vaccine which isn’t a vaccine, fines for dog walkers, England/Scotland/Wales tourist borders, face nappies for children, closure of parks, beaches, quarantine of the healthy, fines if your sister comes to lunch, shelves in supermarkets covered up, young spotty policemen deciding if your journey is necessary, serious consideration of compulsory  ‘vaccination’, government by big pharma, an unprecedented government  propaganda  campaign (war time included), an un English  neighbour snitching phenomenon, fear becoming a virtue, the closure of pubs & sports clubs, the growth of the speakeasy, the destruction  of the hospitality industry, a Soviet style embargo on foreign travel, closure of car valeting sites, short term destruction of education, explosion of national debt, you can walk a golf course but not with clubs, a testing system not for  purpose, data which covers cases but not mortality,  the abandonment of death certificate protocols…….

Oh I give up, you can no doubt add to these.

Ponder this history of British mortality statistics below from the Office of National  Statistics.

Will social historians be able to spot the pandemic spike from it? I can’t,  can you? 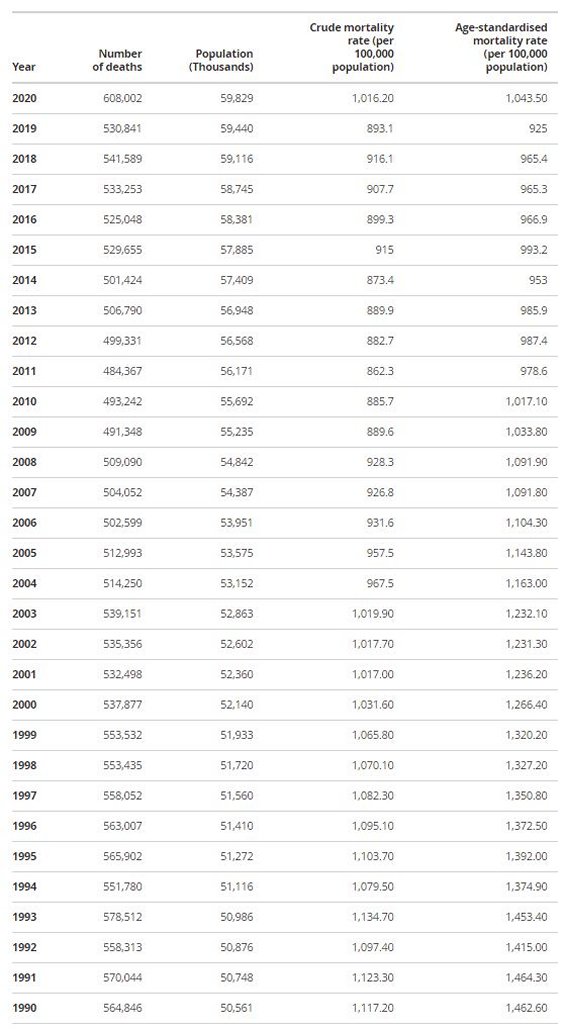 What is MSM? I have met most but not all the following highly paid MSM elite. I name & shame many of them here. When did you ever hear an original thought, penetrating question or challenge to faux science or economics? Ever seen them at Dover reporting on the biggest invasion of England since 1066 ?  When did any of them ask ‘What is the role of government ?’

There are more but MSM is too vague, when the revolution comes I need to know how many lamp posts we will require.