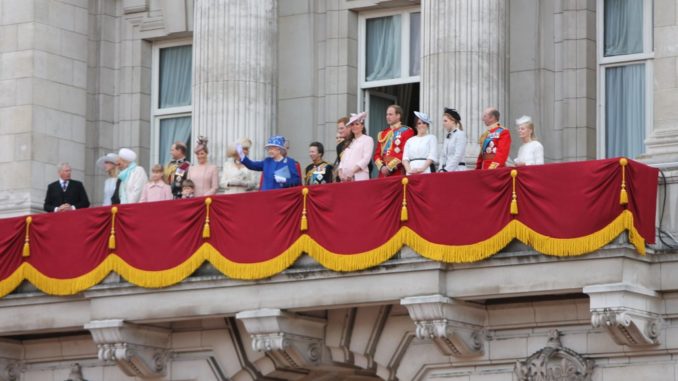 It grieves me deeply to have to write this piece, I am a staunch monarchist as are my forbears & extended family, I hold the Queen’s Commission as did my father & have written extensively  in the past about the value of a parliamentary democracy under a constitutional monarchy. One only has to look at the many failed republics in the world to see why.

Have I abandoned my beliefs then? No. The dysfunctional House of Windsor has abandoned their post. Our constitution has been salami sliced away for decades, so thin have been the slices they have been almost imperceptible to the lay eye. Her Majesty has done her best against a sea tide of destabilisation relentlessly pursued by professional politicians, big business, the civil service & main stream media.

However of course a big thick slice of unconstitutional  salami was sliced away at Maastricht by the appalling John Major. It was the final, total abandonment by Her Majesty of her coronation oath. The subcontracting of our government  to a foreign power. Google her oath taken in 1953 if you doubt me. From that betrayal at Maastricht Elizabeth II became a citizen of the European Union, as did we all. Probably the most shameful act by our country  since Munich.

I have some sympathy (not a lot) because she heard no voice of political opposition.  Both her governments  & opposition were committed to  membership, as were public service broadcasting  & the civil service. Queen Victoria would have been unmoved but modern Britain is a different beast, moreover a referendum of the  people endorsed our membership, her position was close to impossible. But a constitutional monarch is just that. Parliament must have her signature or we have no real constitutional monarchy as understood since 1688. Her Majesty should not be a rubber stamp, in recent years sadly, it us what she has become.

With the United Kingdom’s secession from the European Union the last half of the second Elizabethan age could simply be put down as an aberration, perhaps like the post civil war Commonwealth  under Cromwell.

But the dark clouds are gathering for the House of Windsor. Not all of their own making however.

Let us examine the facts.

Most people of the Commonwealth  would agree the monarch is held in high global esteem personally. I have met her & her consort the Duke on a number of occasions in political & military circumstances, I too  hold them both in high esteem, but the clock runs down on the last serious European monarchy.

Where did it all go wrong?

I think if we park for the moment the abandonment of constitutional  responsibility at Maastricht, we must look at the now hopelessly degraded honours system, a system bound with hoops of steel to the monarchy itself.  I accept the honours are from the recommendation of both her government  &  opposition. I would assume she has no objection to probably two thirds of them. Military personnel,  people who have advanced science or philosophy, captains of industry, sponsors of charity, any field of patriotic endeavour. But every year more & more people fill the honours list who are not just clearly unworthy but actively hostile to our culture & their own birthright. They hate everything about Britain, harbour socialist views, are Republicans, very outspoken critics of our history. Usually celebrity television, film or even pop music people, mostly tax exiles. Amazingly these people who one might imagine would shun their honours scramble to get them. You know who I mean, Emma Thompson, Patrick  Stewart, Ian Mckellen, Bob Geldorf, in the celebrity line up but scores of failed civil servants with dismal track records remainers  to a man (or woman). John Major got the Order of the Garter ! He doesn’t even believe Great Britain should be a self governing  nation. The whole disgusting charade has tainted the monarchy which facilitate it. No,  she doesn’t  have to go along with it. It is pure abrogation of resolve.

I turn to the Church  of England , of which our sovereign is head. The long line of utterly hopeless politicised Archbishops and  Bishops has lead to a total collapse in the Anglican Church, empty pews & England turned into a secular state. You might argue it is inevitable, yes certainly under the current leadership. The recent Coronavirus  debacle saw the churches close just when they were needed most. Where was the leadership ? The argument for disestablishing the Church of England grows apace.

But the most powerful threat of all to the monarchy comes in the form of the current Prince of Wales. Instead of re enforcing our traditions & culture he joins with the globalisation freaks , secular, sinister technocrats seeking a new world order. Hard wired into pseudo political climate science of which he understands  nothing  & is allowed by his position to avoid challenge & in avoiding such challenge he ensures his ignorance remains embedded in the  psyche of not only his sycophantic entourage but his son, the next Prince of Wales. Wokery dominates the House of Windsor as the common sense Duke if Edinburgh is replaced by the Common Purpose mafia surrounding them.

The opinionated, charmless  Prince of Wales has it seems no redeeming features. When Edward VII was Prince of Wales he at least had charm & warmth,  notwithstanding his disastrous Entente Cordiale which finished the Empire it is apparent Prince Charles will help destroy the British  economy with his faux science. It ill behoves  one of the world’s richest men to advocate expensive energy for the masses whilst  travelling the world in private aeroplanes & driving Aston Martins.

Short of bouncing the Princess Royal on to the throne it would seem not. People suggest Charles should step aside for William, but he has become equally woke as his father, to the extent it seems his son has psychiatric problems. You cannot be King of England  if you adopt the negative attitude of a Dad’s Army Private Fraser. We are ‘all doomed’. We do not want ‘a defender of faiths’, we want a defender of our faith. We want confidence in the future, optimism, in short old fashioned leadership. It is all very well having a chest full of medals given to you by your mother, but real accolades have to be earned.

The Prime Minister could always summon the Prince of Wales & read the riot act. Remind him politics of the day is not his business but the constitution is. But how likely is this when Charles is endorsing the Prime Minister’s girl friend’s wokery.

Charles, Bill Gates, George Soros, Richard Branson, the IMF, the Davos mafia, Goldman Sachs are all forming the very Alliance a King of England should be challenging.

I am still a constitutional  monarchist, not a Republican, but the Windsors must go & we must dig out a long lost Tudor, Plantagenet or Stuart & start again if we can persuade them to stick to their brief.