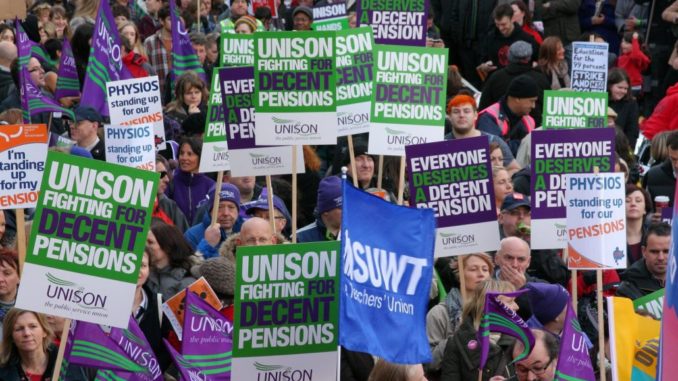 As a confirmed libertarian you might expect I am hostile to the concept of trade unions. Not at all. It is very libertarian to form a group to bargain with employers for better pay & conditions. What I do not accept as a libertarian is the idea you can intimidate people in to joining one or stopping workers from taking the place of union labour. But as a concept  there is nothing wrong with unions per se.

Let me reflect on British trade union failure since 1945.

Trade union leaders made horrific post war mistakes. They became politicized. They forgot a basic principle that the welfare of workers was completely at one with the welfare of the company or institution for whom they worked. This was not a mistake made by the Germans. The great economic leap forward by a defeated Germany was engineered strategically by Ludwig Erhard  who understood socialism in pre war Germany was a mistake as was Soviet style communism in the east. German trade union leaders picked up on this tactically. They made no pretensions at trying to sway Germany from a social democracy . Their mission was to bring a more generous slice of the economic pie for their members, understanding full well that only the success of their company could facilitate this. The automobile industry was the great bellwether for this approach. Volkswagen,  BMW & Mercedes dominated European car sales in the headwind of a rising national  currency. Value for money was the watchword as it is today, nobody buys a German car because they are cheap. Degrading a national currency to increase exports is a typical Keyensian delusion (See Magic of Banking, Amazon) for a detailed analysis of this phenomenon).

Across the North Sea the British trade union leaders saw Soviet communism as a role model for Britain. The TUC was run by economic Dinosaurs. If you haven’t seen the film I’m Alright Jack with Peter Sellers as Fred  Kite do so, it is an amusing way of opening the window on post war British trade unionism. In 1973 the song ‘You Can’t  Get Me, I’m Part of The Union’  hit the top ten.   The  end game was Red Robbo’s destruction of British Leyland aided by a management of epic incompetence & a coal strike of awesome futility in the mid 80s. The country had had enough, beer & sandwiches at Number Ten ended with Maggie. British motor manufacturing disappeared  for decades. The story was the same everywhere. Manufacturing suffering the worst.

On the other side of the world the equally heavily defeated Japanese enjoyed an economic  renaissance of equal measure. Driven by a completely new management concept  built on team work not on ‘us & them’ worker management divides. Quite commonplace in British manufacturing  now but revolutionary in the 80s when it started to become adopted. A visit to the Jaguar works in Coventry is an eye opener, we were shown the factory by an erstwhile shop steward who boasted of the production & efficiency growth since the 1970s & how the result has made Jaguar workers the best paid in England.  British trade unions became more & more irrelevant from the early 1980s albeit they still call the shots in oligarchical monopoly public sector institutions, the hopeless NHS being the prime example.

Yet in modern Britain, the Anglosphere generally & western Europe the union leadership has joined the establishment.  There is no divide now between fat cat politicians, journalists, bankers & trade union leaders. All their salaries are many multiples of the national wage, there is no connect with ordinary working folk. Trade union leaders simply don’t care about their members, although some hanker for political left wing change but increasingly left wing governments have shot their political fox. So they take the salary, index linked pension & keep their heads down.

There are two major policy daggers at the British working man’s throat, a group now with as much  political representation as a 19th century Russian serf.

The first is greenery. I attempted to lobby the TUC annual boondoggle in Manchester ten years ago, I tried to explain to its hierarchy that without cheap & reliable energy heavy manufacturing would disappear from the United Kingdom. The acceptance of the hypothesis (faltering even then) that man made carbon dioxide would somehow boil the planet would be the final nail in the heavy industry coffin in Wales & the North of England , that it would simply export jobs to the far east where the hypothesis was not accepted & fossil fuels were the bedrock of production.  Russia & China didn’t even turn up to Glasgow, amazing for the Russkis who know how to party. Now we have a net zero ambition beloved of feather bedded middle class virtue signalling north London vegans safe in the public sector.  No word from the unions. It puts me in mind of the parody sung to the tune of the red flag, ‘the working class can kiss my arse, I’ve got the forman’s job at last’.

The global conspiracy against the working class of the western ‘democracies’ continues at an alarming  pace. One might almost believe western leaders are in the pay of the Shanghai  Co- operation Organization. Nobody voted green in Britain or indeed America but the virtue signalling political, media & celebrity bulldozer crashes on regardless. The great & the good don’t even pretend to care about working people. The sheer contempt matches even the pre revolution French or Russian aristocracy.  Spiralling energy costs for the low paid & old age pensioners doesn’t  seem even to awake the moral conscience of the modern trade unionist. In the old days they might have been thick but at least cared a bit about old age pensioners.

The silence from the trade union leadership is deafening.

Workers now are being sacked or threatened with dismissal for refusing mass medication contrary to the Nuremberg Code. A medication with unknown long term consequences & virtually undocumented short term effects. A drug (a spike protein, not a traditional vaccine) which the prime  minister himself concedes neither prevents contraction or transmission of the Coronavirus.

Maggie Thatcher at the height of her power would never have dared to press this appalling tyranny on low paid workers in the public or private sector without a 1926 style general strike. The now virtually defunct House of Lords would never have allowed the Nuremberg Code to be set aside or employment legislation to be post ratified or the principles of English law to be suspended.

Where the hell are the trade union leaders ? Safe in their leafy suburban villas.

There is only one small over worked union standing up to the terror. Send the big Union leaders a white feather in the post.